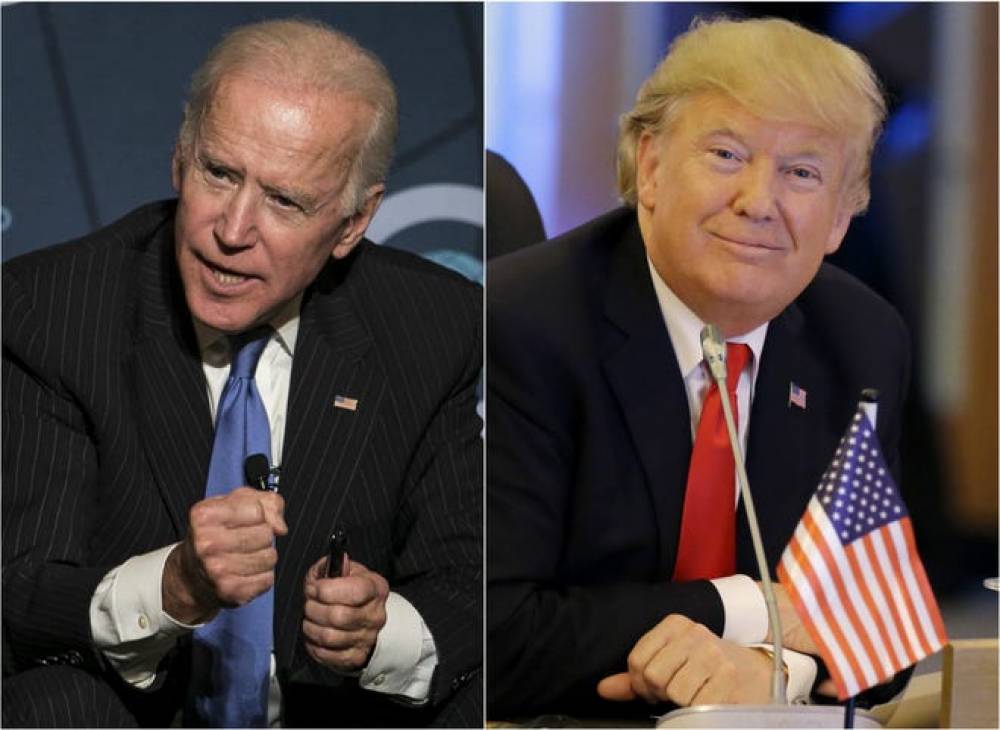 Joe Biden's lead over Donald Trump has narrowed as Republican voters decide to stick with the president and the Democrat's support has fallen below 50%, today's IBD/TIPP 2020 election poll update finds.

The latest IBD/TIPP Trump vs. Biden poll update shows the Democratic challenger leading the Republican incumbent by 5.2 points, 48.7%-43.5%, in a four-way presidential poll of likely voters. Libertarian candidate Jo Jorgensen has the support of 2.5%, and Green Party candidate Howie Hawkins 1.2%.

Since the IBD/TIPP 2020 Presidential Election Tracking Poll launched on Monday, Oct. 12, Biden's support has dipped from51.9% to 48.7% in a four-way race. Trump poll numbers have been relatively stationary. Still, Trump has reached a new high-water mark Friday with 43.5% support, after slipping as low as 42.3%.

Support for third-party and other candidates has climbed, as has the share of undecided voters. Meanwhile, more voters are declining to say whom they support.

In a head-to-head Trump vs. Biden poll, the Democratic nominee leads by 6.2 points, 49%-42.8%. Similar to the four-way presidential poll, Biden's support has slipped 3.7 points since Monday in the one-on-one matchup, while Trump's support is up a half-point.

Joe Biden holds a 46%-36% lead among likely independent voters in IBD/TIPP's latest presidential poll update. Yet Biden is having only a slightly easier time corralling Democrats than Donald Trump is having in nailing down GOP votes. Biden leads 94%-4% among Democrats. Trump leads 92%-5% among Republicans.

Among people who voted for Trump in 2016, 6% say they'll vote for Biden. Just 1% of Hillary Clinton voters back Trump this year.Meanwhile, Biden gets more support than Trump among 2016 third-party voters (38%-25%) and nonvoters
(50%-34%). However, much of the slippage in Biden's support has come from those latter two groups. Biden had the support of 51% of third-party voters and 68% of nonvoters in the Oct. 12 IBD/TIPP 2020 election poll.

In 2016, almost all presidential election polls pointed to a Hillary Clinton victory over Donald Trump. The IBD/TIPP Poll was one of only two election polls credited with predicting President Trump's 2016 victory. TIPP, IBD's polling partner, succeeded in picking up on the greater enthusiasm among Republicans for their candidate.

Still, now that Biden's support has fallen below 50% and more GOP voters are sticking with Trump, the president has a fighting chance. The Oct. 22 debate, a coronavirus resurgence as well as progress toward a medical breakthrough, the Supreme Court nomination fight and the fate of fiscal stimulus negotiations could all shape the Trump vs. Biden race's final weeks. The unprecedented level of mail-in voting, which brings the potential for disqualified ballots, is a wild card.

Yet, despite the tightening of the IBD/TIPP Biden vs. Trump poll, Trump will likely need at least a partial solution to his troubles among seniors and suburban voters.

Trump's Electoral College victory in 2016 came despite losing the popular vote by 2.1%. However, no candidate has won the presidency with a bigger popular vote deficit since 1874, when Rutherford B. Hayes lost by 3%.

The RealClearPolitics average of 2020 presidential polls shows that Biden's lead has grown from 6.6 points before the first debate and Trump's coronavirus case to 9.4 points currently.

Urban voters prefer Biden by just a 12-point margin, the IBD/TIPP 2020 election poll update finds. Clinton won urban voters by twice that margin, according to 2016 exit polls. Meanwhile, rural voters back Trump by a 21% margin, down from 28% in 2016. Yet the suburbs may be shaping up to be the big difference this year. The IBD/TIPP presidential poll shows suburban voters back Biden vs. Trump, 54% to 38%. By comparison, exit polls from 2016 show Trump won the suburbs, 50%-45%.

That explains why Trump made a blunt appeal to suburban voters — particularly suburban women — while campaigning in Pennsylvania on Tuesday. "Suburban women, will you please like me? Please. Please. I saved your damn neighborhood, OK?"

Trump was referring to a fair-housing regulation adopted by President Obama's administration and later rolled back by Trump. The rule altered criteria for awarding federal funds to overcome historic patterns of segregation.

President Trump is trying to shore up support among seniors, who are far more susceptible to the coronavirus and who have been critical of his handling of the pandemic. Last week, Trump pledged that he would provide free access to the Regeneron Pharmaceuticals (REGN) antibody drug that he credits with restoring him to full health. The Trump administration also is getting ready to send out drug cards worth $200 to tens of millions of seniors.

More data on the income, religion and education of voters in the Biden vs. Trump poll can be found at the main IBD/TIPP tracking poll page.

What Investors Think Of Biden Vs Trump

Regardless of their own voting preferences, investors seem to be warming to a Biden presidency and potential Democratic sweep. That would likely mean higher corporate taxes and higher taxes on investment gains. Yet this month's stock market rally has come as a Biden victory has looked more likely. Wall Street may be relieved that an extended court fight over the election's outcome may be avoided. The 2000 recount coincided with a stock market pullback of nearly 10%. Investors also are hopeful that a Democratic boost in federal spending will offset any downside from tax hikes and more regulation.

So far, Wall Street seems to be ignoring Trump's warning that stocks would face a reckoning under Biden. Trump tweeted on Monday, "Remember, Stock Market at an All Time High, and going up. 401k's at RECORD. With Sleepy Joe comes Tax Increases, jobs losses and DEPRESSION like never seen before!!! VOTE!!!"

Biden Vs Trump Poll: Whose Voters Are More Committed?

How secure is Joe Biden's advantage over Donald Trump? A number of questions in the IBD/TIPP 2020 election poll try to tease that out.President Trump has an advantage when it comes to voter intensity. Among those who intend to vote for Trump, 74% back him strongly, vs. 66% among intended Biden voters.

The IBD/TIPP presidential poll finds that 9% of likely voters say they're at least somewhat likely to change their mind before Election Day. Among both Biden and Trump backers, 8% say they may change their mind. Despite Biden's moderate 2020 election poll lead, just 36% of voters expect him to win, while 35% think Trump will prevail. Meanwhile, 46% think most of their neighbors will vote for Trump, and just 35% think their neighbors will mostly back Biden.

The daily update of the IBD/TIPP 2020 election poll reflects a survey of 1,101 registered and 951 likely voters, from Oct. 11 through Oct. 15. The weighted party split of likely voters includes 347 Democrats, 331 Republicans and 241 independents.

The Biden vs. Trump poll likely voter sample has a credibility interval of +/- 3.2 percentage points. IBD's polling partner TechnoMetrica applies a multimodal approach using "traditional" telephone methodology, with live interviewers supplemented by online surveys. Each day approximately 200 interviews with registered voters are conducted, of which 125 are from telephone and 75 from online. In the telephone sample, roughly 65% of interviews come from a cellphone sample and 35% from a landline sample.