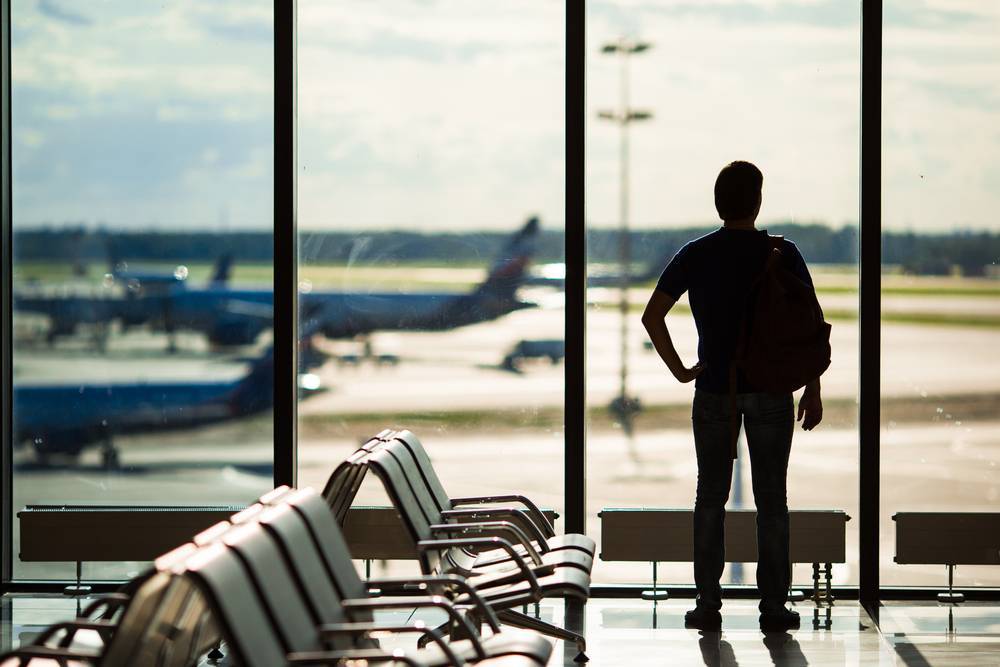 Before flying from Philadelphia to Los Angeles in June, Alice Dailey pored over news articles to prepare for air travel in the coronavirus era, which tanked airline stocks and threw the industry into crisis.

In the plane, a person across from her wore a white, full-body hazmat-style suit with blue stripes and blue gloves. An English professor at Villanova, Dailey planned to fly to London this month to research a book. But facing travel restrictions in Europe and concerns about confined spaces, she canceled.

"I find myself doing this 'Can I do without this, does the book really need it?' calculus," Dailey, 49, said. "And I guess I've decided the book doesn't really need it."

Airlines are trying to restore confidence in the safety of air travel, hoping to fill more of their cabins this summer. American Airlines (AAL), for one, officially ditched its seating limit to return to full flights. But the airline industry faces harsh economics. Safety steps must be balanced with sustainable finances.

The result in the years ahead, analysts suggest, is likely a more Covid-conscious industry that is slower and more expensive.

While airlines plan to fly more passengers in the coming months, nearly two-thirds of Americans remain uncomfortable with air travel, according to an IBD/TIPP poll conducted in late June.

Those who are willing to fly can expect a vastly different experience. At airports, passengers describe short TSA lines, closed food stands and gate seating areas they had all to themselves.

You may be asked whether you have Covid-19 symptoms before check in. Discount carrier Frontier will check your temperature before boarding. Airline crews are disinfecting cabins with fogging spray guns.

"The last 90 days have been nothing but a nonstop review of every point where we have contact or had contact with the customer," said Bill Lentsch, chief customer experience officer at Delta Air Lines (DAL).

If more people don't get comfortable flying again, airline stocks will be in for prolonged pain. Slight shifts in passenger behavior have outsize effects on bottom lines. Citigroup estimates that a 1% bump in corporate travel volume, for instance, affects airline profits by 10%.

Analysts and executives have said it could take at least three years before air travel demand and passengers' habits settle back to a pre-pandemic state. Airline stocks are under renewed pressure as travel restrictions from New York, New Jersey and Connecticut hit reservations.

Delta sent videos to its top corporate customers to provide an overview of what travelers can expect, Lentsch says. Half of its corporate clients have lifted travel restrictions, he adds. But corporate travel could be "permanently" lower as more people work from home, Moody's has warned.

Despite the collapse in air travel demand, fares are actually above pre-pandemic levels. Average domestic one-way fares for Delta, American and United Airlines (UAL) have held above $300 since mid-April vs $280 in mid-December, Cowen analysts covering airline stocks estimate.

That's due largely to major U.S. carriers idling 50% of their fleets as recently as late May, according to Airlines For America, an industry group.

Cowen analyst Helane Becker said airlines didn't cut fares through April and May because the people flying "absolutely had to." Fares could fall if more destinations open back up, she said. But more states are pausing or rolling back reopening plans as infections spike.

"I'm going to call it neutral," he said, when asked whether coronavirus-related safety measures are a net benefit for travelers.

With less flying and more cleaning, turn times — or the time between a plane's landing and getting it ready for the next flight — can vary. In some cases, they have ballooned to one to three hours.

All those extra health requirements may push fares higher. They could result in longer lines and longer wait times to board.

United CEO Scott Kirby said at a conference in May that changes to cleanliness standards could become "permanent." Analysts say cleaning standards are the airline service change most likely to stick around after the pandemic. Plexiglass shields at airport counters could remain simply because they're already in place.

As for shorter-term changes for airline stocks, Delta and Southwest (LUV) have agreed to block the middle seat through September. That's a nod to social distancing, even though six feet of space is rare in a metal tube. United's middle seats are still available. Meanwhile, the IBD/TIPP poll shows keeping airliners' middle seat empty is a top concern.

Analysts say keeping the middle seat empty is economically unsustainable. Moody's estimates that for a flight on a Boeing (BA) 737 or an Airbus (EADSY) A320, airlines would have to jack up fares by 50% to break even "compared with pre-virus booking patterns." Root says a hike that steep is unlikely.

American Airlines' pilots union has proposed having the government, which is already spending tens of billions in bailout money for airlines, buy up seats "so that no passenger would have to sit next to a stranger."

Dennis Tajer, a representative for the union, said in an interview that emptier cabins seemed "to be the soup du jour for safety and for confidence." When American removed its 85%-full seating cap in July, he said the decision threatened passengers' already tenuous comfort levels.

The Price Is Wrong For Airline Stocks

If the extra elbow room from an open middle seat becomes popular enough, flyers could be more willing to pay for the space. But if fears of the coronavirus remain elevated, it also might cause backlash.

Frontier tried to charge passengers an extra fee to keep the middle seat open, then abandoned the plan after drawing criticism. "The flying public should not be charged extra to stay healthy on flights," three U.S. lawmakers wrote to Frontier's CEO last month.

"This is not the right time to monetize a middle seat," Atmosphere Research analyst Henry Harteveldt said. "If all goes well, if we recover from this pandemic, if we are flattening the curve, if confidence returns, yes, in six months or a year, it would be fine."

Before the pandemic, some consumers paid a premium for a few more inches of legroom. In the years ahead, Harteveldt says an airline could still go where the money is.

An airline "could say, you know what, we're no longer going to try to cater to all airline travelers," Harteveldt said. "We're going to focus on a certain subset of travelers who earn a certain amount of money or more."

In the meantime, some analysts believe airlines could take away the little things on flights. To minimize contact between passengers and the flight crew, alcohol service has been restricted, or served on trays. At Delta, passengers get water, snacks and sanitized wipes in a single bag.

Stronger balance sheets, after mergers and a decade-long economic rebound, allowed airlines to worry a little less about the financial impact of, say, a free glass of wine or a snack. Now, they probably care more.

"United would hand you a stroopwafel without really knowing whether they were getting a revenue premium for that stroopwafel," said Seth Kaplan, an air travel expert. "When you're earning billions of dollars, you just don't care how much each stroopwafel costs."

As customers flooded customer-service phone lines to cancel flights this year, airlines loosened up their refund policies. But even if airlines buckle more easily on refunds, passengers don't necessarily benefit financially, because easy refunds could push fares up too.

"There's always been this very powerful incentive to fly sick, which is that airline tickets are nonrefundable for the most part," Kaplan said. He added: "If airline tickets just became refundable perpetually ... that would put a lot of upward pressure on airfares also."

How quickly the airline industry recovers also depends on what passengers do, or don't do, to ease others' anxiety about flying.

In the pandemic's early days in the U.S., there were signs of solidarity. Charlie Shapiro, who runs an ad agency near Boston, said he has flown around three times a month since March. On a JetBlue Airways (JBLU) flight that month to West Palm Beach, Fla., some 15 people were aboard. The flight crew seemed eager to put passengers at ease, and ultimately made him feel safe.

"The entire experience was as if every single human interaction was more human than usual," said Shapiro, 60.

Washington, D.C., resident Taylor Jackson says most people wore masks during her flight to Denver several weeks ago. She wiped down her seat and tray table — something she says she does regularly when flying. A man in the aisle seat in her row offered her Lysol wipes anyway, she says.

"Even that was reassuring," said the 28-year-old communications manager for a medical technology nonprofit. "There is a guy only a seat away from me. But he has the same level of personal hygiene and concern that I have right now."

But no law requires passengers to wear face masks. And in more recent days, masks have become the latest node of partisan tension in the U.S.

The absence of more concrete action could jeopardize the airline industry if a single passenger without a mask makes others scared to fly, says Tajer, the pilots union representative.

The airline industry is looking at other ways to make travelers feel safe. Lentsch says Delta has received mock-ups of alternate seating arrangements.

One setup had thin partitions between the seats. Another had the middle seat facing the opposite way of the window and aisle seats. The carrier hasn't committed to anything yet.

Meanwhile, Boeing has reached out to a range of experts to model cabin airflow and virus transmission. The jet maker is also working with behavioral specialists to figure out how to make travelers feel safe again.

Dan Freeman, a 32-year Boeing veteran responsible for its commercial-aircraft interiors, notes that its jets are already designed to replace flight-cabin air every two to three minutes. Roughly half the air piped into the cabin is fresh air from outside. The ventilation system recirculates the other half. That air, he says, passes through a HEPA filter. The air flows from the top of the cabin downward, and out the sidewall vents.

"The feedback we've been getting is that that information hasn't been well understood in the past and people appreciate understanding it was already built into the system," he said.

Scott Tobias, a Delta pilot, says the reorganization, which he likens to an immense math problem, isn't Delta's fault. He expects to be moved to Salt Lake City from Cincinnati by November.

"There is much doubt, given the quantity of training events ... (and) the ability of Delta to train that many pilots in 365 days, that things will go as planned," he said.

The view from above can underscore the stresses for the airline industry.

One Delta captain, who asked not to be identified, recently flew over the desert in Victorville, Calif. At a logistics airport there, airlines have parked rows of planes amid the epic demand drought. He took a moment to look down.

"It wasn't Delta only. I could pick out Southwest. Everybody has planes that are parked. American. Delta. United," he said. "You hate seeing beautiful metal like that on the ground."